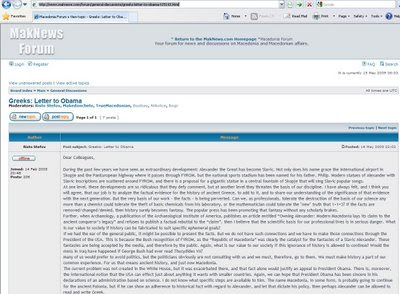 During the past few years we have seen an extraordinary development: Alexander the Great has become Slavic. Not only does his name grace the international airport in Skopje and the PanEuropean highway where it passes through FYROM, but the national sports stadium has been named for his father, Philip. Modern statues of Alexander with Slavic inscriptions are scattered around FYROM, and there is a proposal for a gigantic statue in a central fountain of Skopje that will sing Slavic popular songs. At one level, these developments are so ridiculous that they defy comment, but at another level they threaten the basis of our discipline. I have always felt, and I think you will agree, that our job is to analyze the factual evidence for the history of ancient Greece, to add to it, and to share our understanding of the significance of that evidence with the next generation. But the very basis of our work – the facts – is being perverted. Can we, as professionals, tolerate the destruction of the basis of our science any more than a chemist could tolerate the theft of basic chemicals from his laboratory, or the mathematician could tolerate the "new" truth that 1+1=3? If the facts are removed/changed/denied, then history surely becomes fantasy. The popular press has been promoting that fantasy without any scholarly brakes.Further, when Archaeology, a publication of the Archaeological Institute of America, publishes an article entitled “Owning Alexander: Modern Macedonia lays its claim to the ancient conqueror’s legacy” and refuses to publish a factual rebuttal to the “claim”, then I believe that the scientific basis for our professional lives is in serious danger. What is our value to society if history can be fabricated to suit specific ephemeral goals?
If we had the ear of the general public, it might be possible to present the facts. But we do not have such connections and we have to make those connections through the President of the USA. This is because the Bush recognition of FYROM, as the “Republic of Macedonia” was clearly the catalyst for the fantasies of a Slavic Alexander. These fantasies are being accepted by the media, and therefore by the public. Again, what is our value to our society if this ignorance of history is allowed to continue? Would the mess in Iraq have happened if George Bush had ever read Thucydides VII?
Many of us would prefer to avoid politics, but the politicians obviously are not consulting with us and we must, therefore, go to them. We must make history a part of our common experience. For us that means ancient history, and just now Macedonia.
The current problem was not created in the White House, but it was exacerbated there, and that fact alone would justify an appeal to President Obama. There is, moreover, the international notion that the USA can effect just about anything it wants with smaller countries. Again, we can hope that President Obama has been sincere in his declarations of an administration based on science. I do not know what specific steps are available to him. The name Macedonia, in some form, is probably going to continue for the ancient Paionia, but if he can show an adherence to historical fact with regard to Alexander, and let that dictate his policy, then perhaps Alexander can be allowed to read and write Greek.
Please read below the letter to President Obama with the supporting documentation. I hope that you will then join with those of us who think that history is so important that its factual basis must be preserved. If so, please send back to me your NAME, TITLE, and INSTITUTION as you would like them to appear. You will see examples of the format on page 3 of the “letter”.
I would ask that you return that information no later than this Saturday, May 16, so that the letter can go out shortly thereafter to President Obama. It is important that it not be circulated beyond our own discipline before it arrives on his desk.
Sincerely,
Stephen G. Miller

We, the undersigned scholars of Graeco-Roman antiquity, respectfully request that you intervene to clean up some of the historical debris left in southeast Europe by the previous U.S. administration.
On November 4, 2004, two days after the re-election of President George W. Bush, his administration unilaterally recognized the “Republic of Macedonia.” This action not only abrogated geographic and historic fact, but it also has unleashed a dangerous epidemic of historical revisionism, of which the most obvious symptom is the misappropriation by the government in Skopje of the most famous of Macedonians, Alexander the Great.
We believe that this silliness has gone too far, and that the U.S.A. has no business in supporting the subversion of history. Let us review facts. (The documentation for these facts (here in boldface) can be found attached and at: http://macedonia-evidence.org/)
The land in question, with its modern capital at Skopje, was called Paionia in antiquity. Mts. Barnous and Orbelos (which form today the northern limits of Greece) provide a natural barrier that separated, and separates, Macedonia from its northern neighbor. The only real connection is along the Axios/Vardar River and even this valley “does not form a line of communication because it is divided by gorges.”
While it is true that the Paionians were subdued by Philip II, father of Alexander, in 358 B.C. they were not Macedonians and did not live in Macedonia. Likewise, for example, the Egyptians, who were subdued by Alexander, may have been ruled by Macedonians, including the famous Cleopatra, but they were never Macedonians themselves, and Egypt was never called Macedonia.
Rather, Macedonia and Macedonian Greeks have been located for at least 2,500 years just where the modern Greek province of Macedonia is. Exactly this same relationship is true for Attica and Athenian Greeks, Argos and Argive Greeks, Corinth and Corinthian Greeks, etc. We do not understand how the modern inhabitants of ancient Paionia, who speak Slavic – a language introduced into the Balkans about a millennium after the death of Alexander – can claim him as their national hero. Alexander the Great was thoroughly and indisputably Greek. His great-great-great grandfather, Alexander I, competed in the Olympic Games where participation was limited to Greeks.
Even before Alexander I, the Macedonians traced their ancestry to Argos, and many of their kings used the head of Herakles - the quintessential Greek hero - on their coins.Euripides – who died and was buried in Macedonia– wrote his play Archelaos in honor of the great-uncle of Alexander, and in Greek. While in Macedonia, Euripides also wrote the Bacchai, again in Greek. Presumably the Macedonian audience could understand what he wrote and what they heard.Alexander’s father, Philip, won several equestrian victories at Olympia and Delphi, the two most Hellenic of all the sanctuaries in ancient Greece where non-Greeks were not allowed to compete. Even more significantly, Philip was appointed to conduct the Pythian Games at Delphi in 346 B.C. In other words, Alexander the Great’s father and his ancestors were thoroughly Greek. Greek was the language used by Demosthenes and his delegation from Athens when they paid visits to Philip, also in 346 B.C. Another northern Greek, Aristotle, went off to study for nearly 20 years in the Academy of Plato. Aristotle subsequently returned to Macedonia and became the tutor of Alexander III.
They used Greek in their classroom which can still be seen near Naoussa in Macedonia.
Alexander carried with him throughout his conquests Aristotle’s edition of Homer’s Iliad. Alexander also spread Greek language and culture throughout his empire, founding cities and establishing centers of learning. Hence inscriptions concerning such typical Greek institutions as the gymnasium are found as far away as Afghanistan. They are all written in Greek.
The questions follow:
Why was Greek the lingua franca all over Alexander’s empire if he was a “Macedonian”? That is why the New Testament, for example, was written in Greek?
The answers are clear:
Alexander the Great was Greek, not Slavic, and Slavs and their language were nowhere near Alexander or his homeland until 1000 years later. This brings us back to the geographic area known in antiquity as Paionia. Why would the people who live there now call themselves Macedonians and their land Macedonia? Why would they abduct a completely Greek figure and make him their national hero?
The ancient Paionians may or may not have been Greek, but they certainly became Greekish, and they were never Slavs. They were also not Macedonians. Ancient Paionia was a part of the Macedonian Empire. So were Ionia and Syria and Palestine and Egypt and Mesopotamia and Babylonia and Bactria and many more. They may thus have become “Macedonian” temporarily, but none was ever “Macedonia”. The theft of Philip and Alexander by a land that was never Macedonia cannot be justified.
The traditions of ancient Paionia could be adopted by the current residents of that geographical area with considerable justification. But the extension of the geographic term “Macedonia” to cover southern Yugoslavia cannot. Even in the late 19th century, this misuse implied unhealthy territorial aspirations.
The same motivation is to be seen in school maps that show the pseudo-greater Macedonia, stretching from Skopje to Mt. Olympus and labeled in Slavic. The same map and its claims are in calendars, bumper stickers, bank notes, etc., that have been circulating in the new state ever since it declared its independence from Yugoslavia in 1991. Why would a poor land-locked new state attempt such historical nonsense? Why would it brazenly mock and provoke its neighbor?However one might like to characterize such behavior, it is clearly not a force for historical accuracy, nor for stability in the Balkans. It is sad that the United States of America has abetted and encouraged such behavior. We call upon you, Mr. President, to help - in whatever ways you deem appropriate - the government in Skopje to understand that it cannot build a national identity at the expense of historic truth. Our common international society cannot survive when history is ignored, much less when history is fabricated.